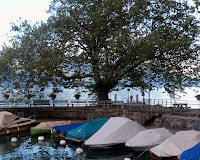 They say a rising tide lifts all boats.  That certainly seems to be the theme for my portfolio in 2013.  I am doing well in a nominal sense, but on a relative basis, I am generally pretty flat with the market.

I did just read this morning Warren Buffett's (2012) annual letter to shareholders (of which my wife is one).  He commented that while he had a good year in 2012, he did under-perform the S&P 500 a bit. His comment was that Berkshire does better when "the wind is in your face".  I encourage everyone to read the letter, though it felt a bit repetitive from past letters to me.  The real theme was "believe in America".  He and his companies are reinvesting in America and he chastises CEOs that are not reinvesting due to the excuse of "uncertainties".

Everyone keeps predicting a swoon in the market, but I suspect as long as a lot of people are predicting it, the swoon will probably not happen.  Buffett talks at length about this.  He comments that over the past century, even with fits and starts, the overall trend is for the market to go up. So if you have a long term horizon, it does not make sense to be jumping in and out all the time based on what he calls "tarot cards".  I think we are all guilty of this to some extent. Frankly, he is as well as I know in past letters he comments that he has not put money to work as stocks were richly valued.  But I know the basic premise of my dividend portfolio is to keep the majority of it invested at all times,  with just pruning about the margins.

Speaking of the Dividend Portfolio, here is how it stands:

So up to almost $50k in annual dividends. Keep in mind everything I show is a proportion of actual holdings. Then my MFI portfolio is lagging.  Not sure what that is all about.


The MFI Index is also struggling a bit, up 5.4%, which is lagging pretty consistent with my actual investment lag.

So you can see that x the education stocks, they are about on par with Russell 3000.  Obviously the POOSF blow up is a drag as well.

I was clearly not making great decisions this week, sometimes I think I would be better off not looking at the market regularly.  Just once a quarter would frankly work at least as well.  I sold MPC at the start of the week.  It then went up another 5% during the week!  I bought NEM and a smallish share of NUGT. NEM was down 3.8% and NUGT a disappointing 11.9%.

The week before I sold GLRE, SLCA, GTAT and VIVHY.  I guess in net, the four sales were smart. But SLCA is up 17% since I sold them AND they actually dropped over 10% after I sold them, so I could have had a 30% gain if I had re-upped my shares post their drop.  Of course that sort of thinking will drive you crazy.  I sold my GTAT at $3.64.  They are now $2.78.  Should I buy back those shares now?  I consider that almost every day.

I think that is enough for now. Hope everyone has a nice weekend!
Posted by Marsh_Gerda at 8:35 AM