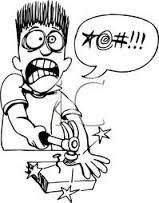 Happy New Year to any followers still out there.  As you may have guessed, for the time being I have pretty much tossed in the towel on MFI.  I mean it just isn't working very well.

It feels to me very similar today ("It's Different This Time" can be a very dangerous phrase) with the "disruptors" and social media stocks, many not having business models that make a dime being bid to the moon.  So I have moved a large chunk of cash to the sidelines.  If I see a crash in the "disruptors", I will start nibbling at value stocks again.  But I at least owe my gentle readers a little tidy up on 2019.

While I largely sold my positions in May, I can certainly tell you how they would have done if I had held.  As readers may recall, I had two components, MFI Select and MFI Formula.  I'll show them in two ways: (1) assume I sold the stocks at the anniversary date and (2) assume I held stocks for all of 2019.

First, as a reminder,I had closed two MFI select tranches in 2019:


Neither one was all that great.

Here are the open 4 tranches assuming I held them all year:

Two absolute train wrecks with May and August.  I've been a bit lazy on the dividends,so these aren't exactly right, but you get the gist.  Then here are the two tranches assuming I had closed the first two in August and November:

Same steps with MFI Formula tranches.First a reminder of how the two most recently closed tranches before I stopped blogging:

Then here are the 4 open tranches at that time assuming I held all through 2019:

Again, I'm lazy with dividends (both for Russell 3000 and my stocks), but directionally it makes little difference.  Three of the four tranches were losers.  Overall lost by an average of 6 points.

Then here are tranches if I had closed them on schedule (again only show first two as newest two would still be open):

Yeah, I know.  Doesn't change much.  Too many stinkers (stocks down by 30% or more... what MFI Formula was trying to weed out).

To continue my tidy-up, I did post last December a listing of 13 stocks that (many MFI) that I felt were super cheap.  Here is how they did for a year (I closed them December 17th as I was going on vacation):

My readers may recall I also have had MFI tracking portfolios (50 stocks over $$100m) that I have been tracking since 2006.  Here is how the December 31st 2019 portfolio fared:

The three other portfolios I started for tracking in 2019 are also trailing by 15 points plus.  It is like MFI is working in reverse, which is why I commented this feels like 1999-2000 when money was flowing away from old economy stocks into sexy dot coms.

I also did some modest tracking of large cap (over $3b) MFI stocks in 2019.  Pretty similar story.

I also started in 2019 a CAPS portfolio called MFI Diary on Motley Fool that randomly picks about 7 stocks once a quarter.  You can see the results here, not so hot: 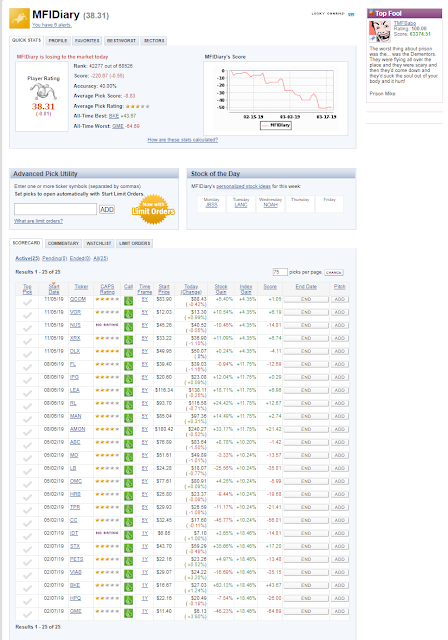 I will set up two tracking portfolios for 2020 and perhaps follow up a few times here.  Have a great year everyone!