Kind of weird, the MFI website wasn't updated this weekend. They seem to be a little less on the ball of late. Hope that isn't a trend. My "Cruncher" really isn't ready to go live. So I ended up using Thursday's run and closing pricing for my Mechanical portfolio. With that approach, there was one new stock added (and it probably will drop off this week): NATH. While I love their hot dogs and am a fan of the stock (I owned it in the past once), it is a very low volume stock and even buying a relatively small amount is difficult. So I'll take a pass.

I don't think I commented on the most excellent earnings last week by RTN (Raytheon Reports Strong Fourth Quarter and Full-Year 2009 Results; Reaffirms Outlook for Continued Growth in 2010). I really like having some of these big cap stocks in my mix. Sure they're up "just" 17%, but it is (in my mind) a 17% that I am not likely to have to give back. They are super solid earnings, cash flows and dividends. A classic stock that MFI identified as the market going "nuts" on 10/30 when they hit the top 30 list at 45.28. Another one is Pfizer, which hit the top 50 list at 6/5/09 at 14.51 and is up about 30%.

I think that is why my mechanical portfolios are working better than other approaches as it identifies some really quality stocks when they bottom out... so you get them cheap. Here is the top 30 inforce list right now:

Posted by Marsh_Gerda at 6:50 PM No comments:

Where I am At After Almost 4 Years 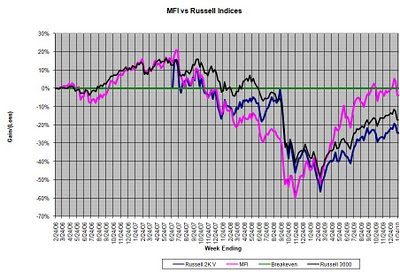 I did buy a new stock yesterday, GXDX, which seems like a mini Quest Diagnostics (which I owned a couple years ago). They are a blowing and going company, it was surprising to see them on the list. You can see they had a temporary (I hope) fall from grace:

PRICES
But look at their guidance:

Based on continued infrastructure expansion and implementation of its strategic plan, the Company projects capital expenditures of $8.5 million for the full-year 2009, which includes approximately $4.5 million in maintenance capital. A planned laboratory expansion beginning this quarter is now expected to cost approximately $9.5 million, with approximately $4 million to be spent in 2009 and the remainder in the first half of 2010.

For 2010, revenues are expected to grow to approximately $235 million. The Company intends to provide more detailed guidance in February when reporting results for the fourth quarter and full-year 2009.

I mean look at the growth, 180m to 235m. They have an impeccable balance sheet. Here are their stats a couple of days ago when they came on the list:

Posted by Marsh_Gerda at 6:51 PM No comments:

State of the Union

I rarely get on a soapbox here, but I was watching a bit of the Geithner show today and it just stunned me how Congress doesn't get it. It is almost scary. And with Obama giving his State of the Union address, I felt it was as good a time as any to toss in my two cents. So much so, that I actually just sent an email to all my elected officials.

The whole meltdown of last year has become a giant finger-pointing exercise and now people like Obama are trying to make political hay of Financial Institutions. Not two days after Brown won MA, and Obama is up there with Volcker with his bold bank tax, which screws the banks that were doing the right thing. In fact, in many cases it wasn't non investment banks screwing up, it was AIG, Lehman, Morgan Stanley, Goldman Sachs, Bear Stearns, Freddie and Fannie Mae.

What really needs to happen is that we let free markets work. Insolvencies can happen and not bring markets to their knees so long as they are done in an organized fashion (think Washington Mutual or Merrill Lynch). The bailouts actually helped other Financial Institutions. I am sure that the day before Bear Stearns had to shut their doors, you could have bought their bonds for 20 cents on the dollar... guess what? They got 100 cents! Now if you buy bonds in a risky company, why should you get 100 cents on the dollar backed by taxpayers? Stunning. Same can be said for Citi, Wells Fargo etc... the bondholders were unscathed. They should have been forced to make concessions BEFORE the Fed and the Treasury stepped in. That only makes sense, but you never hear anything about that. Don't you think if Warren Buffett bailed out a company he'd force concessions from everyone? Bondholders, Stockholders may be even creditors and Unions? Think about what he got when he put 5 or 10b in GE and GS. Not only did he get a high interest rate (about 10%) but he got options to buy their stock in the next 10 years at a low price. Why shouldn't our govt demand onerous terms like that as well? And as voters, if our govt hands over our tax dollars that easily, do we have the right people in office?

Ok, I have vented and feel better. Here is a great link to read: A Blueprint for Financial Reform

Then, I was also a bit angry at JTX today, which is now down about 40% for me. They seem to keep getting hit for the same thing (Jackson Hewitt plunge on lack of funds for loans). I have to think that under $3, if you believe they will survive, they are a steal. And finally CBPO shot up 15% today, recovering a chunk of the previous days 25% drop. I did add shares (not in my MFI portfolio) at the start of the day as they seemed way oversold.

Wow, CBPO got taken to the cleaners today... by a rumor. Checkout the chart for the day:

10x normal volume and an incredible 25% plunge. What caused it? A blog. China Biologic: There Will Be Blood

The author, who openly admitted he is short CBPO, essentially says that the people who seeded the company are felons and insinuated not all is as it seems with the company. I have seen this play out several times with these Chinese companies, LIWA and CSKI also had "scare" short articles. They have not yet born out to be correct and I'd suggest there is no reason to believe there is truth behind this one as well. It is troubling that people try to start these stampedes, I suspect it may be illegal, though if there are some facts behind the post it may be impossible to press charges. Good chance for the brave to buy CBPO. Here are my stats for them (if you believe the Compustat filings):

I thought I would use my new Cruncher spreadsheet to rank Chinese Stocks. Many of them for various reasons don't make the MFI screen. Some interesting choices here: