I closed my MFI Formula tranche last night.  I will start a new tranche either tomorrow or Tuesday (I am traveling tomorrow, so may not have time).

The tranche was my first formula approach to "lose" and it was pretty bad.  Below is a list of the four tranches that have now closed.

BKE and VIAB were just too bad to overcome.  This approach continues to run virtually flat with just being in a benchmark.  I will stick with it for a bit longer, but am actively considering alternative approaches. 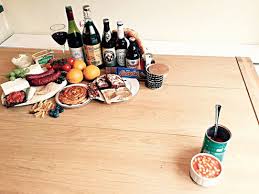 I think that this picture indeed is worth 1,000 words. A friend of mine gave me a great Hank Paulson quote when we were in the midst of the GFC: "It is all built on trust... if the big banks pull back on interbank lending, it's over within hours. From there is goes too fast to stop, and not just one bank; the whole system. And average people wondering, "is my money safe?" They start pulling out their cash. And after that: lines outside banks, smashed ATMs.  In a couple of weeks, there's no milk in the store."

So, hopefully it doesn't come to that. But if the speed of trade slows down and frictional costs are added, it does have potential to erode trust. I understand the anger - heck I  go on rants about the government here in CT all the time and I am in very good shape. The anger must be ten fold if you feel you've lost your job or are under-employed and you view it as the government's fault.

So with that preamble. I had a very bad Friday (down 3.5%). But for the week I was down "just" 1.7%. So while people seem a bit panicky right now, in the grand scheme very little has happened portfolio-wise. It could get much worse (that is my guess ==> it will go down another 10%).

Definitely lost some ground this week.  I do not know why, but MFI stocks seem to struggle more than the benchmarks in times of "crisis".

So not a great June (sell in May and go away was probably a good strategy). But am back to where I was 5/1  - not a huge step back.

My one tranche just has a week to go. It is a "loser", in the words of "the donald".

This approach continues to be a "push" against the benchmark.  Theoretically, if interest rates are now tethered more closely to  0, these stocks should become relatively more attractive as they all yield 2.4%+.

Well, Captain Obvious will tell you that the Brexit vote was bad news for Financials.   So my BAC warrants have gone from bad to worse. One of my worst investments ever, and I've had some bad ones.

But it is interesting that GLDI and O held up well during the week. Gold and Real Estate.

Have a great weekend everyone,  I gotta run as we're heading out!
Posted by Marsh_Gerda at 9:49 AM No comments: